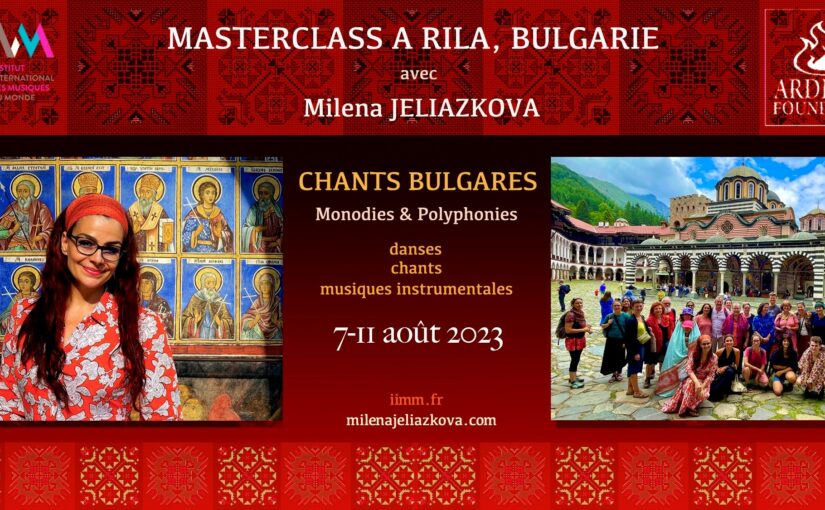 In partnership with the Ardenza Foundation

Learning “in situ” of Bulgarian monodic and polyphonic songs in Rila in Bulgaria.

Carrying a strong emotional charge, Bulgarian songs have intrigued and upset beginner/experienced listeners and singers for many years now. Coming from a country located at the crossroads of Civilizations, composed of several ethnographic regions, crossed by a history rich in twists and turns, these songs are characterized by various musical stylistics. This master-class, organized by the ARDENZA Foundation in Bulgaria, will be led by Milena Jeliazkova, singer of the BALKANES quartet and teacher of Bulgarian Songs at the International Institute of World Music (iimm.fr) and will briefly explore these various regions through the secular and sacred polyphonies offered.

PROGRESS OF THE MASTER-CLASS

REGISTRATIONS WILL OPEN IN JAN. 2023

The cost of registration includes:

Bulgarian and French citizen, Milena JELIAZKOVA began her piano and singing studies at the age of six with Kristina Boeva, professor emeritus of the Academy of Musical Arts in Plovdiv. At the same time she took lessons in traditional Bulgarian songs and dances with her mother, a singer and dancer in “Ensemble Trakiya”. After eight years of both, classical and traditional training in her country, she invested herself, in France, with BALKANES, a quartet of Bulgarian a cappella polyphonies, in traditional Bulgarian singing and the world of sacred Slon and Byzantine songs. Milena has been singing since 1997 in this a cappella female ensemble that performs in France, Switzerland, Italy, Bulgaria, Tunisie, Germany, USA…

Her eclectic musical tastes have led her to become increasingly interested in the traditional songs of the world in general and the various singing techniques attached to them.

In 2006, she created with Jean-Pierre Caporossi and Tony Canton the project KËF – élektro Balkans. Milena has also been singing for 15 years in the Cie Henri AGNEL, which explores medieval and contemporary Mediterranean repertoires and with which she tours in France and abroad.

In 2017, she co-founded the SIBYLLES TRIO with Françoise ATLAN and Milena ROUDEVA, and in 2019 the “MUSTAAR” voice and percussion duo, with Malik ADDA. That same year, she was chosen by Simon-Pierre BESTION, founder, and artistic director of the company LA TEMPÊTE, as soloist in traditional singing for his creation “Prophet(s)/Jerusalem” sponsored by the Festival of Saint-Denis and the Basilica of Vézelay.

In 2020, the BALKANES quartet of which she is the driving force, is chosen by ANDRÉ MANOUKIAN to  sing on the new CD of the jazzman heart and to perform with him on tour from 2022.

In February 2021, the DUO SOURCIÈRES, songs of women from East and West, was born, with Els JANSSENS-VANMUNSTER, singer and artistic director of the MORA VOCIS Ensemble.

Milena composes and arranges for all these ensembles, co-animates vocal workshops for all audiences in France, Italy and Switzerland, teaches Bulgarian singing at the International Institute of World Music (iimm.fr) and offers vocal and scenic coaching to beginners and experienced singers (graduated from Harmoniques, Paris.)