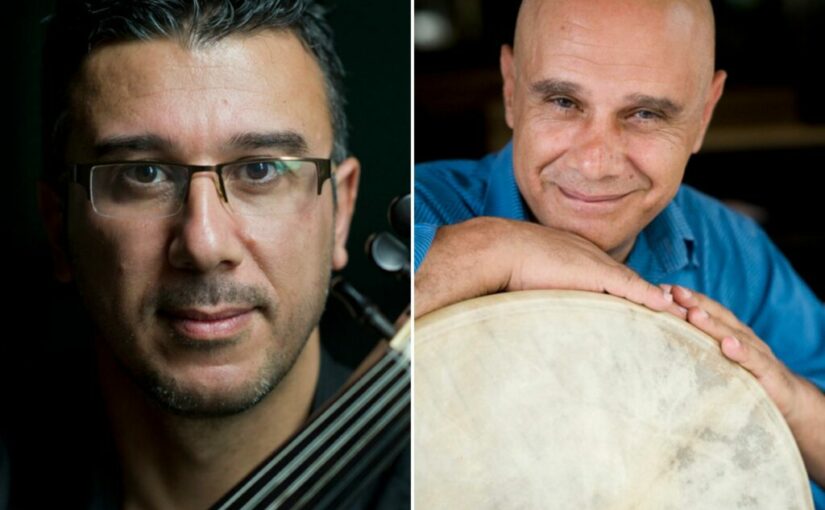 Teaching methods: Beyond the so-called « traditional » teaching, the program will be constituted around a new approach which will allow to widen the various modes of interpretations based on the rhythmic use of the plectrum (device allowing to pluck or scratch the strings of the Arabic Luth – Oud).

In order to implement this work, oriented on the links between melodies and different rhythmic structures, the master class will be led by Ahmad Al Khatib on the Arab lute (Oud), and Youssef Hbeisch on percussion.

This is an innovative teaching method, which will be articulated by following 3 pedagogical methods :
> Collective sessions with Oud and percussions, for the analysis of melodic lines and rhythmic structures
> Individual sessions per instrument, to develop modes of interpretation and improvisation
> Ensembles sessions to put into practice what has been learned at the end of each day.

ARABIC LUTH:
1. Kahramanah for the risha (plectrum) technique and Syrian/Egyptian interpretation
2. Longa Furaq for the ternary risha technique and the Kurdish/Iraqi style
3. Samai Ferahfaza and Samai Ushaq, for the Turkish repertoire
4. Garod, for the odd meter and the ‘percussive’ technique of risha
5. Ayyam Zaman, for the Hijaz Kar range and the excessive use of the 3rd and 4th finger
6. Balad elmahboub for the Egyptian repertoire
7. Samai Nahawand (optional)

Masters of oud and rhythm Ahmad Al Khatib and Youssef Hbeisch express through music a thirst for freedom which revives classicism. Inventiveness combined with refinement, inwardness mingled with energy, generate emotion among all listeners.

AHMAD AL KHATIB
The composer and soul of the group, Ahmad Al Khatib’s knowledge and understanding of the musical culture of his ancestors is impeccable. As their recognized successor, he develops that culture in new directions. From the age of eight, he was under the rigorous instruction of oud master Ahmad Abdel Qasem, going on to complete a university course in musicology and Western classical cello with flying colors. After several years teaching at the Edward Said National Conservatory of Music in East Jerusalem, he was forced to leave Palestine, thereafter publishing several works on oud instruction and on musical transcription for modern Arab composers which have become essential references.

Since 2004, he has taught the theory of modal music, composition and ensemble music at the University of Gothenburg. In Sweden, he enjoys playing alongside musicians interested in exploring Scandinavian folklore. Whilst across the Middle East the red carpet is rolled out for this respected master, in the West he is invited to “World Music” festivals where he listens with fascination to the many traditions from around the globe. An inquisitive inventor of languages who has gone beyond the language of his roots, he has had plenty of opportunity to feed his creative juices from all sorts of inspirations. Although he has equally come to cherish and lay claim to those painful roots.

One foot in the past, one foot in the future: the image is also fitting for Ahmad the instrumentalist, a performer of great purity and depth, who is constantly exploring the oud’s entire range of expression and tirelessly seeking out its finest nuances.

Teaching :
>> Gothenburg University (Sweden) – The Academy of Music and Drama – Since 2006:
• Theory teacher at the world music department
• Ensembles coaching
• Individual instrument teacher
>> At the gearing committee with Stig-Magnus Thorsén planning for a research on Palestinian music.
>> The Edward Said National Conservatory of Music (ESNCM) (Ramallah, Palestine) – From 1998 to 2015 :
• Head of the Oriental music department and the publication unit. Edited a Syllabus for Middle Eastern music grading system used at the ESNCM in Palestine
• Oud, Cello and music theory teacher at the National Conservatory of Music (from 1998 to 2002). Yarmouk University (Irbid – Jordan) College of Fine Arts – From 1997 to 1998.
• Cello Teacher

YOUSSEF HBEISCH
Youssef is often to be found performing at Ahmad’s side. Born in Galilee, he met Ahmad at the Edward Said National Conservatory of Music in East Jerusalem. For ten years, he also taught at the Beit Almusica Conservatory in Shefa’amr, Galilee, where he ran master classes and percussion therapy workshops. He now lives in Paris, but his numerous collaborations have taken him all over the world. He has composed for the theatre and the cinema and has accompanied the likes of Karloma, the Oriental Music Ensemble, Simon Shaheen, Süleyman Erguner, Aka Moon, Issa Hassan, Khaled, Lena Chamamyan, Dorsaf Hamdani, Ibrahim Maalouf, Sister Marie Keyrouz, Lo Còr de la Plana and Manu Théron, Rula Safar, Bratsch, Abed Azrié, the Khoury Project and Philippe El Hage. He is also the fourth pillar of Le Trio Joubran.

At every concert, the audience are blown away by his tenacious dexterity, and the enormous pleasure radiating from his improvisation is infectious. With each project, Ahmad continues to be in awe of the thirst for music and experimentation of his fellow musician, whose creativity nourishes his inspiration. An instinctive musician, Youssef Hbeisch can immediately find his way around any piece of music, stamping his personal mark during the collective stage of its creation. This mark, forged from the discoveries made along the way since his earliest childhood, is composed of many influences, Latin, Indian, African, Brazilian, as well as more personal memories, such as his mother sieving grain. Youssef has drawn on his own culture to develop polyrhythms and polymetres which he has enriched and embellished by virtue of his ever lively curiosity. In keeping with the compositional spirit of Zabad, Youssef wanted to preserve the idea of a traditional sound. Making use only of the customary Darbuka, Bendir and Riqq, he has added some cymbals and bells to enhance the vibrancy and mood. He has also retained a rhythmic expression and a range of techniques which define his distinctive style.

His playing provides the compositions with a framework as well as a sublime sheath of sound: the contrast between the sharp movements he stamps out on the Riqq and the laments he draws from the Bendir will bring a lump to the throat of the most cerebral amongst us.