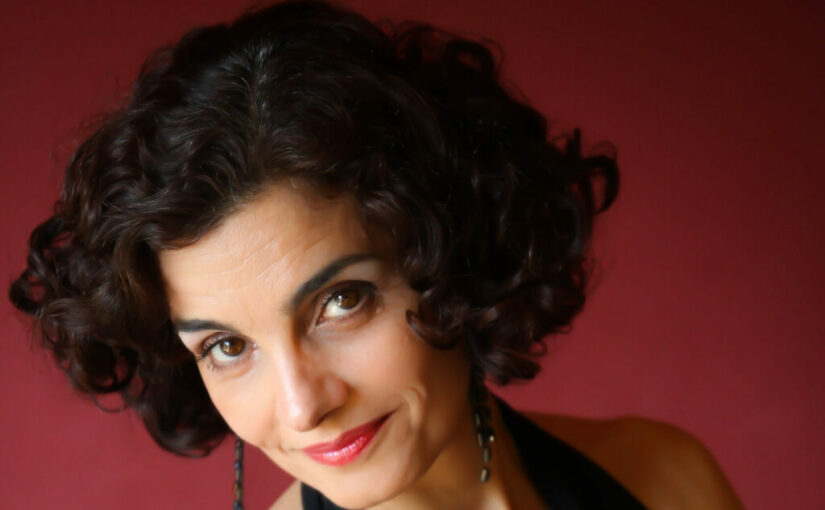 SANDRA RUMOLINO
« Sandra Rumolino belongs to that category of female singers who give pure emotion through her voice, her subtle and researched phrasing, an attitude, a feeling that shines through as a matter of course in each song ».

Born in Buenos Aires, Sandra felt very early on passionate about the popular Argentinean repertoire. Since her Parisian debut in 1987, at the famous Argentinean cabaret “Les Trottoirs de Buenos Aires”, she has often mixed singing with theater and dance.

Since 1997 Sandra has been singing with the Great Tango Orchestra of Juan José Mosalini all over the world and often she performs the title role of Maria de Buenos Aires, opérita by Astor Piazzolla and Horacio Ferrer. She was accompanied by the National Orchestra of Flanders I Fiammingi in Belgium; the Ensemble de Basse- Normandie in France; in the Lisinski Concert Hall in Croatia, with the Chamber Orchestra of Ivan Filipović and soloists from Zagreb; at the Toulon Opera, creation with the National Opera Ballet; in Poland, at the Warsaw Philharmonic, directed by the guitarist Krystof Messinger.

Since 2008 Sandra is part of the show Alma de tango (Noche tango) with the Quartet of Juan José Mosalini and the dancers Jorge Rodriguez and Maria Filali.

Regularly invited to record and sing in various groups: Ensemble Jerez Le Cam, Les Fleurs Noires, Quatuor Debussy, Quatuor Caliente, she has also worked with great soloists such as Juanjo Mosalini, Victor Villena, William Sabatier, Ophélie Gaillard, to name but a few of the musicians who for the past 30 years have called upon the services of one of the most renowned tango singers of the European scene.

Between January 2015 and November 2017, she performed in a duo with the French guitarist and percussionist Kevin Seddiki on a repertoire that goes far beyond tango, as well as with her own compositions. Their first album Tres Luceros released in April 2016, was praised by the French and international press. A new project is launched in 2018:

Sandra will make us listen to Tangos for strings, a repertoire of tangos with arrangements always on measure, for an atypical string quartet. With Cyril Garac on violin, Lionel Allemand on cello and Leonardo Teruggi on double bass and musical arrangements, her soft and persuasive voice slips between the strings like a caress. It is a varied and demanding Argentine repertoire, including also her new compositions. Release of the album in 2021.

Sandra has been performing for many years in the most prestigious concert halls in Europe and around the world, proud of her Argentine culture and her Latin identity, curious and often ready for the most improbable musical fusions, Tango remains the source for her from where she draws all the color and character so typical of her voice.

Since 2013, she has created le Bordeaux Cité Tango Festival, where she is she is artistic director and in charge of programming.

As an educator: She was a teacher for master classes in the school “Les Glottes Trotteurs” for the course « Master class on ethics, technique and aesthetics of vocal tango » and took part in the programming pedagogues for the Festival du Sud d’Arles in July 2010.

Her workshops “The voice in tango: one of the ways of tango” is a meeting between the voice of each and tango as a vector of emotions and history. She is particularly interested in the vibratory feeling of the voice in the body, in its physiology, in the texts as a vector of a discourse that each singer can appropriate to create his own interpretation.

As for her trainings…
She partially studied music and singing, first in Argentina at the Conservatory of Music of the city of Buenos Aires “Manuel de Falla” and participated in different choirs. Then, when she arrived in France, she took private singing lessons with several teachers from different musical genres: lyrical, world music, jazz… She also followed training courses within the framework of her professional training proposed by the AFDAS or the CIFAP in singing, theater and dance and for the method of ALFRED TOMATIS. Contemporary dance lessons at the Conservatoire de Paris I, tango danced with Jorge Rodriguez and Gustavo Naveira and a regular practice of Hatha-Yoga. Sandra has been working for several years with Maria-Agnès Faure, phoniatrist doctor, who passed on to her the basics of Edmund Jacobson’s relaxation method, applied to singing, as well as her passion for the voice and teaching.

In 2012/13 she followed a training of PILATES SUR TAPIS to complete her body work to be able her to transmit it on during her classes to singers.

Diego Aubía specializes in the repertoire of tango and Argentine folklore, after studying classical piano at the Conservatory of Chascomús, his hometown.

In Buenos Aires, from 1992, he studied harmony with Juan Carlos Cirigliano and deepened his knowledge of folklore with Hilda Herrera.

From 1992 to 2004, he worked as a piano and music theory teacher and conducted ensemble workshops at the EMBA (Escuela de Música de Buenos Aires).

In 1996 he was appointed as the titular pianist of the Municipal Tango Orchestra of Avellaneda. Ernesto Franco, first bandoneón of the Juan D’Arienzo orchestra, offered him the position of pianist in his Grand Orchestra. He accompanied the singers Raúl Lavié, Néstor Fabián, Fernando Soler and Guillermo Fernandez.

In 2004, he moved to Paris. Juan José Mosalini offered him the position of pianist of his Grand Orchestra and the Mosalini Quintet and associated him with the creation of the show “Noche Tango”. A double CD-DVD of this show was recorded (Alma de tango, 2015, label Accords croisés). He works with the companies Plan B, Otango and Tango Metrópolis and is a guest of Daniel Binelli’s quintet.

Since 2009, Diego Aubía has been working at the Conservatoire de la Ville de Paris (Conservatoires du 6e et du 13e arrondissement) as a teacher of musical training, chamber music (notably with the creation of a tango workshop) as well as dance and choir accompanist.

Since 2013, he participates in tango singing workshops organized by the singer Sandra Rumolino (accompaniment of singers, pedagogical guidance and training in musicality).

In the last decade he has performed in the most prestigious halls in the world: Konzerthaus in Vienna, Dresden Philharmonic, Mohamed V Theater in Rabat, Konzerthaus in Berlin, Nuovo Teatro dell’Opera di Firenze, Philharmonie in Luxembourg, Finlandia Hall in Helsinki, Tonhalle in Düsseldorf, Bulgaria Hall in Sofia, ElbPhilharmonie in Hamburg, Bunkamura Orchard Hall in Tokyo, Théâtre du Chatelet and Théâtre de Chaillot in Paris.