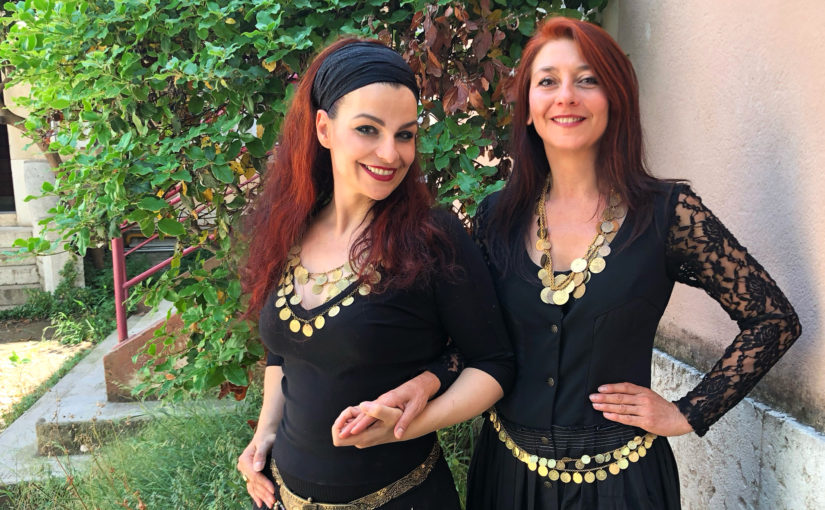 The most important element for traditional Bulgarian musical art (songs, instrumental melodies and dances) is rhythm. It is the junction between text, melody and dance steps – rhythm is what unites Poetry, Music and Dance. Rhythm is considered by Bulgarians as the male principle of music. It is a powerful intermediary between the performer and the outside World, the Cosmos and Nature. The intonation (the tonal sequence of the melody), for its part, represents the feminine principle of the music and reports on the inner state of the performer. Rhythm and Intonation are the two supreme elements of the melody. This in turn, will determine what type of dance will be used in parallel.

Milena Jeliazkova, traditional Bulgarian professional singer, teacher and vocal coach, and Maya Mihneva, traditional Bulgarian dancer teaching at the Conservatory of the “Alpes de Haute-Provence”, have conducted for more than 15 years several separate Bulgarian singing and dancing courses in France and abroad for. Their friendship and love for Bulgarian folk music and popular dances have inspired them to create this master-class within IIWM of Aubagne in order to combine their talents and put them at the service of those wishing to initiate or to improve themselves in these arts, unique in the world. They will cover all the concepts outlined above during this original master-class. The work will be conducted both towards the voice and the body, and above all, to the interaction between voice, breath, body. The concepts of posture of interiority and exteriority, of presence to oneself and to the world will be discussed.

Interpretation: work on vocal and danced expression combining technicality and artistic identity, immediacy of perceptions, relationship to oneself and to others, exploration of sensations and imagination in order to serve the interpretation.

The master-class is open to beginners and experienced singers and dancers, good ear and correct singing are nevertheless essential.

Bulgarian and French citizen Milena JELIAZKOVA began her piano and singing studies at the age of six with Kristina Boeva, professor emeritus of the Academy of Musical Arts in Plovdiv. At the same time, she took lessons in traditional songs and dances with her mother, a singer and dancer in “Ensemble TRAKIYA” (Thrace). After eight years of both, classical and traditional training in her country, she devoted herself to rhythm & blues for three years, and invested, in France, with the BALKANES, quartet of Bulgarian a cappella polyphonies, in traditional Bulgarian singing and the world of Slavonic and Byzantine sacred songs. A graduate of ARSEC/NACRe (MASTER 2 in cultural management), she conducted researches on traditional Bulgarian singing as a vector for the preservation of Bulgarian collective identity, and worked as a communication and dissemination officer with the director of the Amphitheatre of the Opéra de Lyon and for the Baroque Music Ensemble Le Concert de l’Hostel Dieu. Milena has been singing since 1997 in the Balkan Quartet which performs on national and international stages in France, Switzerland, Italy, Bulgaria, Tunisia, Germany, USA, Canada… and at many festivals. Her eclectic musical tastes have led her to become increasingly interested in the traditional songs of the world in general and the various singing techniques attached to them. Since 2006, she created with Jean-Pierre Caporossi and Tony Canton the project KËF – elektro Balkans. Milena also sings in the Henri AGNEL Company, which explores medieval and contemporary Mediterranean repertoires and with which she tours in France and abroad. In 2017, she co-founded SIBYLLES TRIO with Françoise ATLAN and Milena ROUDEVA. She composes and produces arrangements for the four ensembles, co-animates vocal workshops for all audiences, teaches Bulgarian singing at the International Institute of World Music and offers vocal and stage coaching to beginners and experienced singers (graduate of Harmoniques, Paris.)

Experiences: Since 2003, workshops led by Music and Dance Agencies in different regions of France (Centre, Brittany, Rhône-Alpes, Alsace, Basque Country …) and abroad – Switzerland, Mayotte, USA. Internships with Conservatories of Regional Influence and Music Schools, at the request of organizations such as CEPRAVOI (www.cepravoi.fr), private vocal centers, professional and amateur choir directors, theaters and festivals of sacred and world music. Project over 6 months, in 2019, with the Maîtrise de la Loire – direction of the Grand Choeur of 90 people on the occasion of Plovdiv – European Capital of Culture 2019. Regular teacher at the International Institute of World Music, Aubagne (www.iimm.fr).

Born and grown up in Bulgaria, a country with rich traditions, Maya began dancing from its first.

Based in Provence, she participated from 2000 to 2013 in the action of the ARCADE – PACA in favor of traditional, social and world dances. At the same time, ADAC 04 entrusted him with a mission on the development and enhancement of dances in the department.

Graduated in Master 2 “Management of Organizations and Cultural Events” at the IMPGT (Institute of Public Management and Territorial Governance) of Aix-en-Provence, Maya works effectively to the accomplishment of events with regional and national influence, enhancing the territory of the Alpes de Haute-Provence.

Maya is solicited by the CRR of Limoges and Avignon, the Regional Cultural Board – PACA, ARCADE – PACA, Centre Chorégraphique de la ville de Strasbourg, and has been teaching since 2004 at the Conservatoire des Alpes-de-Haute-Provence.

Graduated in Master 2 “Theory and Practices of Living Arts” at the University of Nice Sophia Antipolis, the artist leads many educational and artistic projects, integrates in 2018 the IIMM of Aubagne (the International Institute of World Music) and founds the curriculum in “Dances of Bulgaria, coded & improvised”.

Dancer and choreographer, Maya shares the stage universe with artists of excellence from different cultures: Isabelle Courroy, Milena Jelyazkova, Mariyana Pavlova, Maitryee Mahatma, the AKSAK & MELISMA groups. The complicity between Maya and Isabelle Courroy, kaval player, allows her to explore the rich repertoire of Bulgarian dances, to choreograph and stage them with a contemporary look.

As part of Marseille Provence 2013, European Capital of Culture, for the event “Le Monde est chez nous”, the PACA Region entrusted him with a creation.  “TovaE” brings together nearly 50 dancers and musicians, led under the joint artistic direction of Maya Mihneva for dance and Isabelle Courroy for music.

The documentary film “In tune with the world”, witness of the project, is made by Catherine Catella from the portraits of emblematic artists. It testifies to the rich cultural diversity in Provençal land, and draws among them, the portrait of Maya Mihneva, a luminous and committed artist.