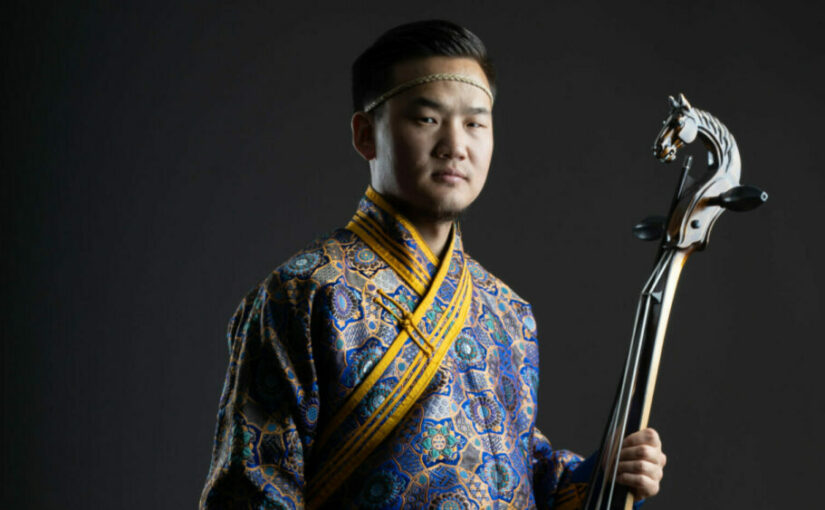 Learn and improve:
• On the Morin Khuur from Mongolia,
• On different instrumental techniques,
• On accompaniment of the overtone singing (Khöömii), throat or other.

Morin Khuur is the ancestral and emblematic instrument of the Mongols. This two-stringed fiddle, whose sound is similar to that of a cello, surprises thanks to its handle surmounted by a carved horse’s head. Its repertoire is vast, ranging from traditional tunes to accompany singing, to dance rhythms, to simple or virtuoso solo pieces called Tatlaga. If its playing retraces the allure of animals, such as that of a horse or a camel, its subtle resonances recall the immensity of the steppes. Its modern and contemporary use can be found in all kinds of creations, particularly in classical music or current ethno-rock.

Mandakhjargal’s approach is rooted in a family tradition of the Gobi Desert and enriched in contact with numerous creative experiences, in traditional, classical or experimental music.

To discover in a simple way the practice of the Morin Khuur, whether one knows how to handle a bow or not, he will propose:

Assisted by Johanni Curtet, in addition to the Mongolian overtone singing courses that have been open for one year, this new workshop will open up an institutional perspective in the teaching of Morin Khuur in France, hitherto little known and transmitted in the private sphere.

Everyone, no basic prerequisites (from 18 years old)

Mandakhjargal DAANSUREN
Mandakhjargal was born on May 19, 1992 in the village of Luus, in the Dundgobi region of Mongolia. From the age of 9, he learned to play the Morin Khuur (fiddle horse or called« horse head ») with his father, musician and luthier. He grew up in the Gobi Desert within a large family of musicians. In 2010, he completed his studies at the University of Soyol (Culture) as a player and professor of Morin Khuur. He learns as well all the techniques of Khöömii and throat singing and masters also the Tsuur flute and the Jaw Harp. At the end of 2010, by settling in France, he began to promote traditional Mongolian music in Europe. He performs in concerts with various artistic partners, including Argusan, Duo Gobi Rhapsodie, Uvidas, Mathias Duplessy and the Violins of the World, Sakhius, Yidjam. He released his first solo album in May 2016 and the album of his new ensemble, Argusan, in 2021.

Johanni CURTET
Johanni Curtet is a musician, ethnomusicologist, teacher of overtone singing and producer. Trained first by Tran Quang Hai, his traditional learning was provided to him by D. Tserendavaa in the Altai Steppes, and B. Odsüren at the University of Arts and Culture of Ulaanbaatar. He teaches Khöömii at the Philharmonie of Paris, the University Rennes 2, Le Pont Supérieur, DROM; in festivals such as Les Suds in Arles, Les Orientales, for professional musicians (Camille), the associative network in amateur practice, and recently at United States universities on the East Coast. Apart from his main trio, Meïkhâneh, he has played with Voix du Sahel (C. Zekri, Y. Moumouni…); in trio with Tserendavaa & Tsogtgerel, in Urbi&Orbi by Pierrick Lefranc (with X. Dessandre Navarre, J. Florent, S. Bernardo, J.-B. Henry) or the electric opera Eve futures by Alain Basso (with É. Trémolière, L. Tejeda…). As a researcher, he is a temporary employee and attached to the University Rennes 2. In 2010, he participated in the inscription of Mongolian Khöömii on the representative list of the Intangible Cultural Heritage of Humanity at UNESCO.