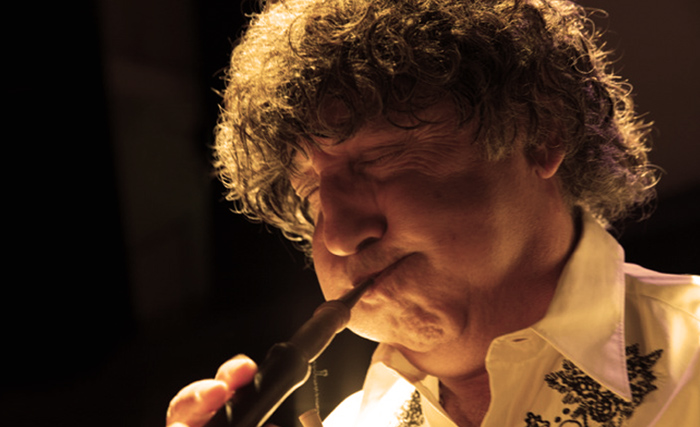 Get initiated according to traditional methods to the music of Armenia and the Duduk.

Every ten years, in front of 100,000 people, is held in Gyumri, the second city of Armenia and cradle of the Duduk, «The Trophy of the Masters», the occasion for a knowledgeable audience to venerate those who enter the very closed circle of the greats. In 2002, Lévon Minassian received this recognition.

Lévon Minassian was born in Marseille. Surrounded by a family living in the cult of music and immersed in an Armenian community, he began at a very young age playing the mandolin in a folk group.

At the age of 15, with in his hands a Duduk brought back from Armenia, he began a long apprenticeship that would continue in Armenia from the end of the 70s, where he went several times in order to work the Duduk with masters, particularly with Djivan Gasparian and Valodia Haroutiounian.

It is then with a great abnegation and patience, and out of love for this instrument that he will seek by his own means to master all its subtleties. Little by little, he will be recognized as one of the most talented Duduk players in the world. His determination and talent have him spotted by professionals. In 1985, the composer Georges Garvarentz asked him to write the music for the movie «Tattooed memories».

A first collaboration for cinema that will be followed by many others, including the soundtracks of «Mayrig» and «588 rue Paradis de Henri Verneuil», «L’Odyssée de l’Espèce» by Yvan Cassar, «Amen» by Costa Gavras, «La passion du Christ» by Mel Gibson…

In 1992, Lévon Minassian was asked by Peter Gabriel to participate in his album «Us» and then to open in solo the concerts of his world tour «Secret world live tour». A spotlight that will make him a very popular Duduk player with the famous names of the variety (Charles Aznavour, Patrick Fiori, Hélène Segara, Christophe Maé, Daniel Lavoie) as well as personalities of the world music (Sting, I Muvrini, Simon Emerson, Manu Katché).

At the same time, Levon Minassian undertakes a more personal work with the composer of dances and film music, Armand Amar. It is with him that in 1998 he recorded his first album, “Lévon Minassian and Friends”, conceived from profane or sacred traditional themes and melodies in which the Duduk energizes its language at the meeting of other instruments of the world, from the Indian violin to the oud.  In 2005, his second opus, “Songs from a world apart”, gave the Duduk a new status as a solo instrument and a musical space outside the traditional context. The arrangements reveal new colors in the Duduk interacting with guest instruments accompanied by a symphony orchestra, the Bulgarian Symphony Orchestra. In 1997 and 2017, he played at the Elysée Palace, invited as a soloist by the presidents of the Republic, Jacques Chirac and François Hollande.

In 2003, he was awarded as Chevalier of the French Order of Arts and Letters by President Chirac. Lévon Minassian helped to ensure that the Duduk became part of the universal cultural values.

It is in this capacity that he joined the International Institute of World Music in 2016 to teach music from Armenia and Duduk.