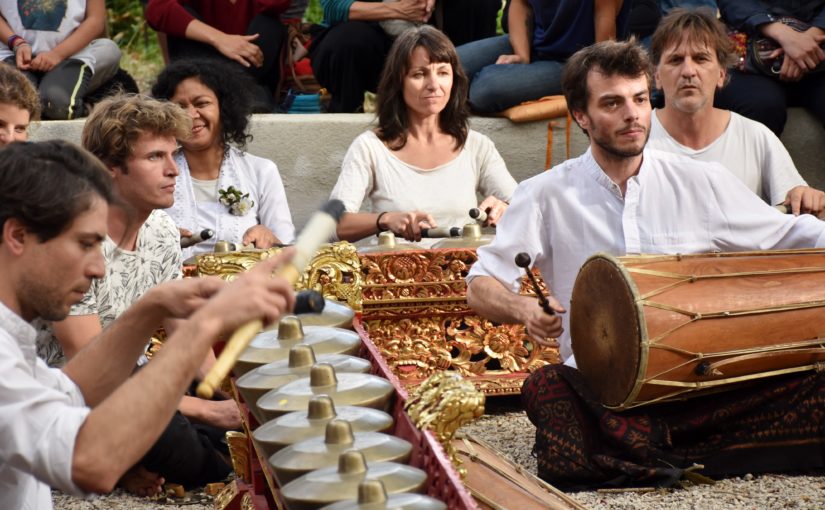 The Gamelan Gong Kebyar is a traditional Balinese instrumental ensemble composed of bronze or iron metallophones, gongs, flutes and drums played by a group of about twenty musicians. It is a collective instrument, an indivisible and unique entity, all the elements from which it’s composed have been granted together and tuned in the same way (factor). Created at the beginning of the 20th century by bringing together elements of ancient gamelans, it is the most versatile, able to play all the repertoires of court, rituals, or entertainment. The dances that the Gamelan accompanies are most often inspired by the great Hindu epics Mahabharata and Ramayana, Javanese legends of Panji and Balinese royal chronicles Babad. There are more than 1500 Gamelans on Bali, all meeting the constant demand for daily activity -ritual or not- on the small Hindu island. The groups are made up by members of the same village community or by several different villages. The oral and collective transmission of the instrument and a reduced instrumental technique allow an immediate practice by all, beginner or experienced musicians. The members of a Gamelan experience the «collective body» through the coordination required by them, the deductive organization of the music, the interdependence of the different parts played and the complementarity of the sounds. Bali’s music is virtuoso, swift and contrasted in its dizzying variations in speeds, flows and dynamics. It is the art of nuances, attacks, resonances and coordination; One of its important characteristics is that of hiccups, or the interlacing of two distinct musical parts to form a single melody (known in Bali as Kotekan), which has reached in Bali a level of complexity unprecedented elsewhere in the world.

Training sessions open to all, without pre-requisites, from 14 years. The Gamelan allows to associate very different levels, according to the positions occupied.