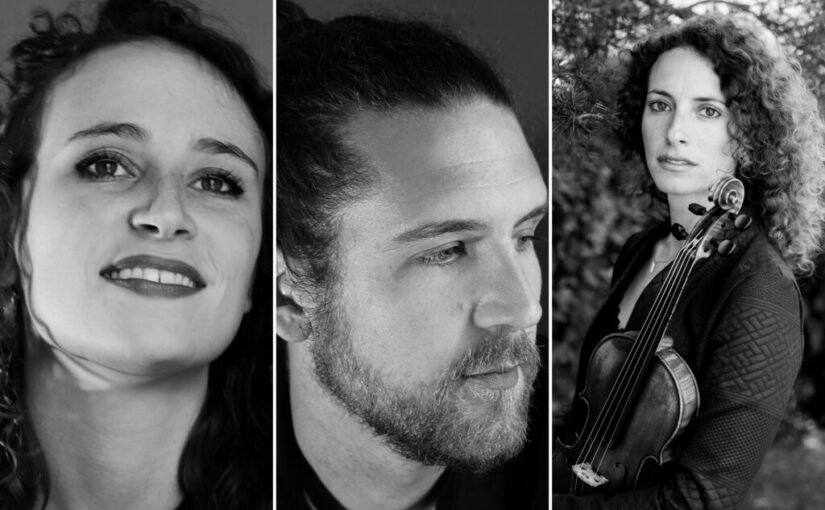 The workshop will begin with a conference that will retrace Piazzolla’s musical evolution from his beginnings as an arranger in the Orquesta Tipica (notably with Anibal Troilo), until his apogee as a world-renowned composer and bandoneonist, passing through the different stages and ruptures that led him to achieve a true musical turning point, definitively marking the history of Tango music.

We will then directly start the practice with students divided into different groups (orchestra, small groups…) according to their level and their expectations.

The workshop will end with a concert where the students will be able to present the fruit of their work.

Practice in small ensembles: from trio to quintet, work on and around Astor Piazzolla’s compositions, in original or arranged version for the ensemble(s), that have registered for the workshop.

In orchestra, as well as in smaller groups, the emphasis will be on the different technical and interpretative aspects essential in Piazzolla’s music. All elements of the language will be addressed, in particular the phrasing, articulation, the specific rhythms and its aesthetics.

We will see in particular how for each instrument these different elements require the use of very specific techniques (attacks, bowing, gestures).

The workshop is open to all professional musicians, amateurs, young students of conservatories without any limit of age. It is required to be comfortable reading scores.

For pianists, a minimum conservatory level of 3rd cycle is required, for reasons of fluidity in the collective work. In addition, we will not accept more than 3 pianists for the orchestra practice, in order to guarantee that each of them can participate in the concert on one piece.

For the other instruments, a minimum level of second cycle is desirable in order to be able to fully benefit from all the work and objectives to be reached during this workshop. If however less experienced musicians show up, we will make sure to adapt and simplify their scores.

We strongly encourage those who wish to register for the small group classes to contact us as soon as possible so that we can set up the groups according to their level.

Any Tango trios, quartets and quintets already formed are welcome, knowing that the pieces they wish to perform, must be from Piazzolla in order to respect the theme of the workshop.

Being of French-Italian origin, born in Nice in 1988, Sabrina Condello is currently recognized as a violinist who distinguishes herself by her eclecticism and her desire to break through the barriers between the different musical environments. Mainly present in France, Germany, Belgium and the Netherlands on both scenes, classical and tango, she also is open to baroque music and contemporary creation. In 2008 she met the Argentinean composer and pianist Gustavo Beytelmann, a former member of the Astor Piazzolla’s Octet. Tango will be a real revelation for her, and from then on this music will not cease to take importance in her artistic development. Since 2011 she is a member of the Quinteto Respiro, winners of the FNAPEC 2015 competition (Paris) and first prize at the Astor Piazzolla 2021 competition (USA). Since 2019 she forms a duo with the bandoneonist Victor Hugo Villena.

The 29 years old Carmela Delgado multiplies projects, meetings and musical trips. She enters the professional world in 2011 with the great Orchestra of Juan José Mosalini with whom she travels the most beautiful halls in Europe (Ellphilarmonie, Konserthaus of Vienna and Berlin, Greek Theatre of Barcelona, the Tonhalle of Düsseldorf …). That same year, she joined the Orquesta Silbando, which honors traditional tango as well as many personal arrangements. After three albums and more than a hundred concerts, Silbando is now recognized as one of the essential typical orchestras of the European scene. As a chamber musician, she co-founded the Cuarteto Lunares at the age of 19, a demanding group dedicated exclusively to the dissemination of today’s authors and tango. She also performs as a soloist in renowned concert halls (the Strasbourg Opera, the Mulhouse Filature, the Rennes Opera…) in repertoires such as Maria de Buenos aires (Piazzolla) produced by the National Opera of the Rhine, the Misatango (Martin Palmeri) with numerous choirs in France and Germany, “Y Borges cuenta que …” (Bacalov)… She is invited by many ensembles to perform, including the Orchestra of Brittany, 2E2M, Lutetia Orchestra… With Aurélie Gallois and Juan-Cruz Suárez, she founded the Argentinean Folklore group “Escamas de Plata de Oro”. Her father, the Flamenco guitarist Manuel Delgado, invited her to record in his albums “Soleado” and “Bella mar” and to accompany him in his numerous concerts in France and abroad.

Lucas Eubel-Frontini was born in Argentina, son of a female jazz singer and a pianist music lover and amateur. Having evolved in a musically eclectic environment, he began playing electric bass as an autodidact, on an instrument he built himself at the age of 15. In 2006, Lucas moved to France to continue his musical studies at the Regional Conservatory of Toulouse, in the class of Valérie Petite, double bass soloist of the National Orchestra of Bordeaux. At the same time he attended the upper cycle of the Music’halle school of contemporary music and jazz in Toulouse. In 2008, he obtained his interpreter diploma at the Conservatory of Toulouse with high distinctions. After these studies at the “Trinity Laban Conservatory of Music and Dance” in London, he obtained in 2013 his Bachelor with Honors in Classical Double Bass. He moved to Paris where he currently resides. Lucas works regularly as a freelance musician in Paris, and performs with the Quinteto Emedea as well as with the Orquesta Silbando, the Cuarteto Lunares, TaXXI (Tango XXI). He regularly collaborates with Orquesta Silencio, the Tanguísimo Orchestra, the Collective Roulotte Tango, Juan José Mosalini and William Sabatier among other groups dedicated to Argentine music.