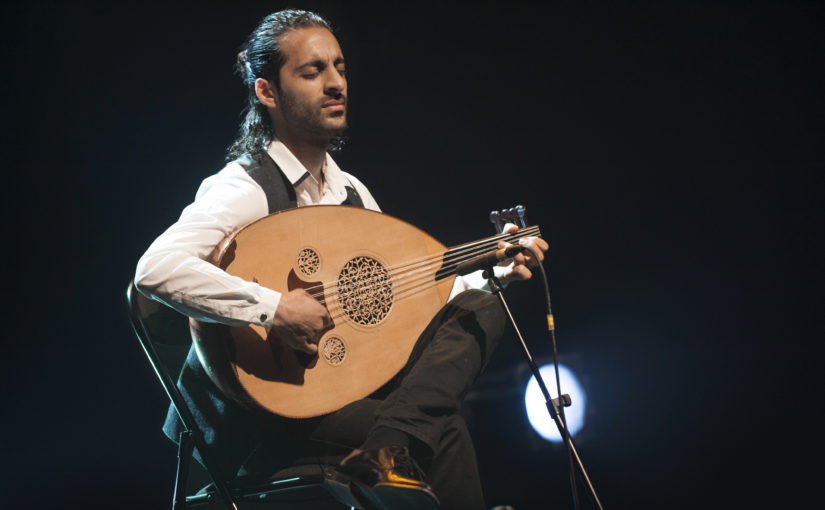 > Presentation of the Oud, the approach of the instrument, learn more about its manufacture, and how to build a relationship with it.  In the presence of WISSAM JUBRAN (intervention over 1 day about the violin-making)

> Technique: theories and aspects on how to get started and quickly achieve one’s goal:
• Techniques for the 2 hands, left and right
• Body language and energy to be transmitted in a note and music
• The right sound for the right music
• The « clean » sound of both hands
• Theories on how to see and read music as lines and colors

> Exercices: practice together to improve the playing quality
• Pre-concert exercices, why and when.
• How to set up your own daily exercises depending on where you are.

> Composition:
• Show some compositional technique, how to start and how to build, how to destroy and how to dare to change.
• Inspiration, how to turn inspiration into melody.

> Improvisation:
• A visit to the maqamat and the art of improvisation, how to build a classical improvisation and bring it to a non-traditional version.
• Handling errors, during performance or improvisation.

> The art of playing in public:
• Live the note you play, play a character on stage and allow the audience to see through the notes.
• Mastering your instrument is a tool that is now stronger than you.
• Constantly challenge yourself, push your limits.

From his first concerts at the age of 18, Adnan travelled the world, performing at various renowned festivals, theaters and concert halls.

At the age of 23, he played at the prestigious Carnegie Hall (NYC), and at the age of 27, at the Olympia (Paris), via the Radio City Hall (NYC), the Salle Pleyel (Paris) and the Théâtre des Champs Elysées (Paris), to name a few of the places where he has performed in public around the world. After living for 10 years in Paris, Adnan created his own musical identity, while playing in his side-project, the Joubran Trio.

While respecting the traditional way of playing Oud, he also followed his desire to come up with something different and innovative.

Based on these experiences and challenges, Adnan released his 1st solo album, «Boarders Behind», using music to express the new identity of his compositions, rhythms, virtuosity and feelings.

Along with his career as an artist and film music composer, winner of the Zyryab Prize for Oud, and two-time winner of the Dubai International Film Festival, Adnan has given some master classes in Oud practice at the Festival Les Suds in Arles and the IMA in Paris, to underline the importance of creating one’s own sound and one’s own path in the practice of the Oud, emphasizing the fact that Adnan is a self-taught, born and raised with the mastery of the instrument. Indeed, his father is one of the most renowned Oud makers in Palestine, and the music was present at home from the moment of his birth, the Oud has become for Adnan a tool to express his life, and bring him to another level on stage.